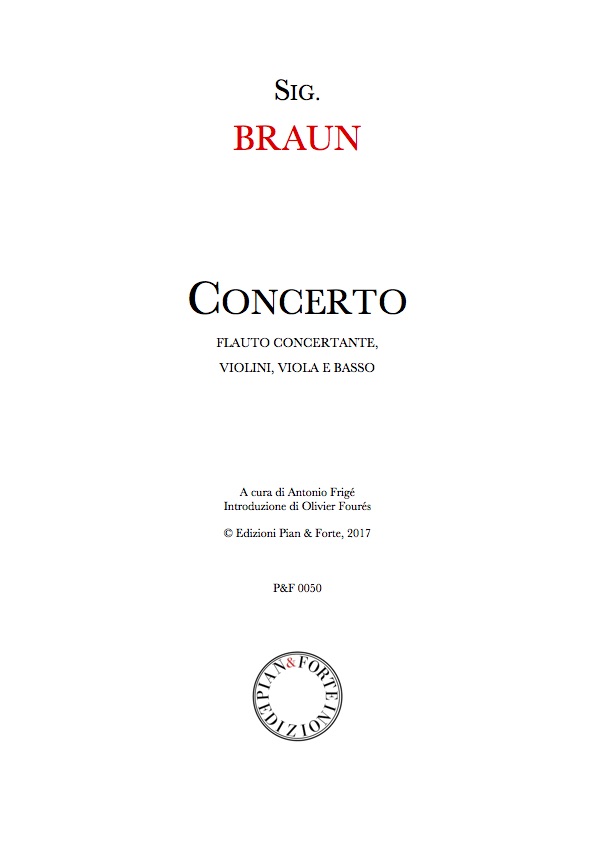 The Dresden University library (SLUB) houses an anonymous manuscript (score) of a concerto for transverse flute in D major: D-D1, 2519-O-1 (originally 2/O/5).
Another source of this same concerto (with some differences) can be found in the Musik-och Teaterbiblioteket, Stockholm (a score and separate parts for violins and two basses) and is attributed to a certain "Braun" of whom there is no record, neither of his compositions nor of his life.
The work displays a strong Vivaldian "school" influence, especially evident in the treatment of motives and themes (one recognizes, for example, from m.100 on in the first movement, the progression used by Vivaldi in the first ritornello of his concerto RV 208 "Grosso Mogul").
This manner of composition was, at the time, particularly developed in Dresden where Johann Georg Pisendel (who had studied with Vivaldi in Venice during the years 1716-1717) had vigorously introduced his style in the court orchestra, buying compositions of every kind regularly for 20 years. Taking this into consideration, we could eventually ask ourselves whether the composition in question might have been a work of the earlier years (early 1720's) of Johann Gottlieb Graun, active in Dresden and a student of Pisendel?