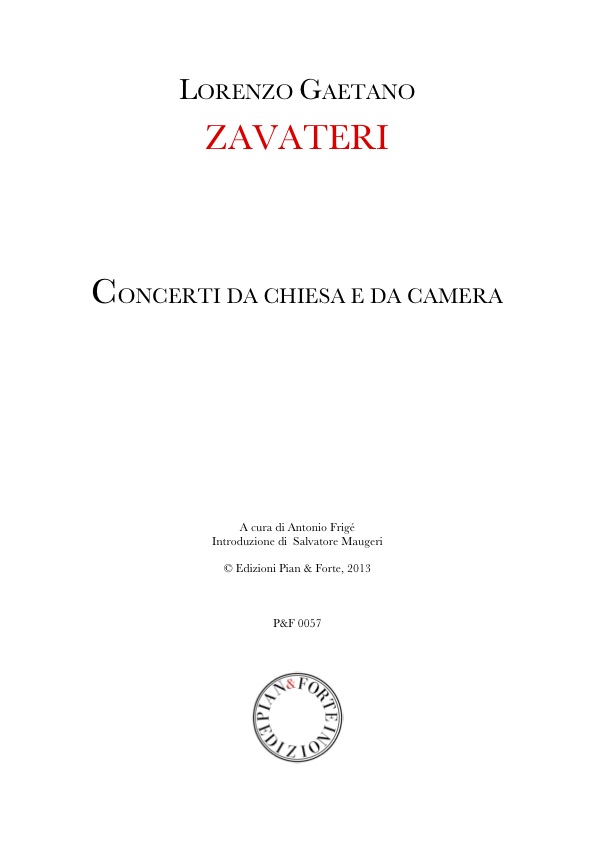 Lorenzo Gaetano Zavateri.....who was he? So Don Abbondio asked himself about Carneade in Manzoni’s “I promessi sposi”. Current historiography has been until now rather negligent in respect of this refined composer and violinist (born in 1690 and died in 1764) whose Opus 1, printed in Bologna in 1738 when the author was 48 years old, can with no doubt be counted among the masterpieces of the Baroque Age.
It seems reasonable to affirm, as it happened with other works, that copies of the score could already have been put into circulation as manuscripts, taking also into account the opus number compared with the author’s age. We have knowledge also of a second printed work – 12 Divertimenti musicali, op. 2 – by Zavateri, which was also entitled as “Accademico Filarmonico”. The reason for such a restricted number of publications is unknown.
We know however, that the “12 Concerti da Chiesa e da Camera dedicated to the Nobleman Signor Cornelio Pepoli Musotti” represent a very elegant synthesis between Corelli’s “Concerto Grosso” and the style of Torelli and Vivaldi. The different styles (ecclesiasticus, cubicularis (chamber) and theatralis) are here wonderfully fused...