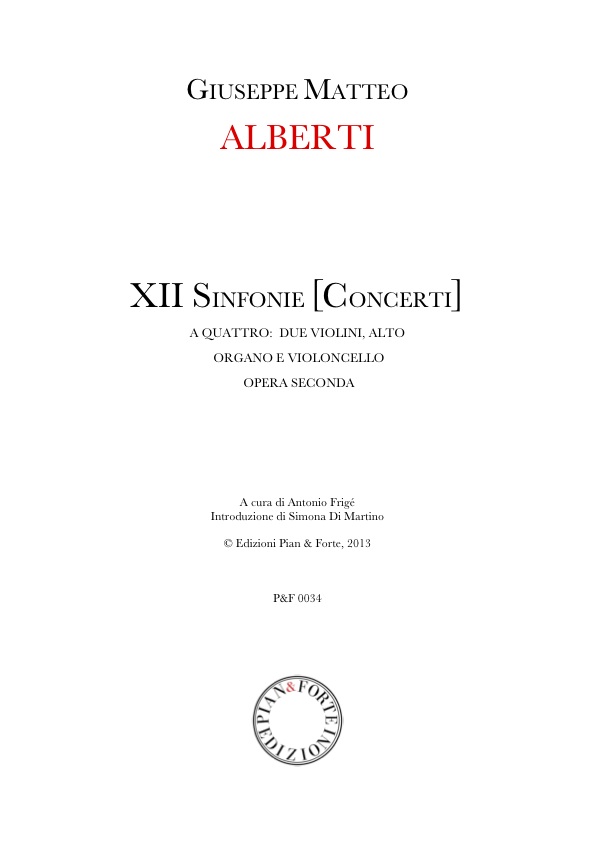 Giuseppe Matteo Alberti was one of the last representatives of the famous Bologna school, which rose around the St. Petronio cathedral, where Alberti had been employed as a violinist since 1709.
Although Alberti spent his whole life, it seems, in the Emilia area of the north of Italy, his music had a huge success abroad, in particular in England where, together with Albinoni, Vivaldi and Tessarini, he was one of the composers whose works were more frequently performed in the first half of the seventeenth century…
They are entitled Sinfonie, but the single compositions are named Concerto inside the collection. This appearing incoherence can be solved if we consider these works as Sinfonias, as far as it concerns the form, because they are all divided in three movements, like the opera sinfonias, with the only exception of Concerto VI (in four movements). If we look inside, instead, these are true concertos, being dialogues between different instruments (in this case, two violins, one viola and the continuo part, to be played by an organ and a cello).
The preminence of violins (with viola and basso just accompanying) is just one of the orchestral solutions that Alberti uses in these concertos (in particular in no. III, IV, V and X). There is, instead, a wider attention to the balance between the instrumental groups in no. VII, VIII and XI. Concertos I, VI and IX are notable for their “section” approach, with violins dialoging with viola and bass. Concerto IX has viola and bass playing the same part, becoming therefore a trio sonata.
Scattered through the whole collection there are solo episodes and also whole sections (see the Presto in concerto VI) that can show the virtuosity of the first violin, a necessary trademark for a composer of the time.
Concerto XII, being the closing work, shows in itself the culminating point of this musical creativity and contains all the instrumental groups used in the previous works. The only exception to the four part group is Concerto II, that adds to the basic quartet two more violins obbligati, and therefore it allows more kinds of instrumental contrasts. This concerto is the only one being divided in sections alternating Soli and Tutti, on the model of Corelli’s concerti grossi…