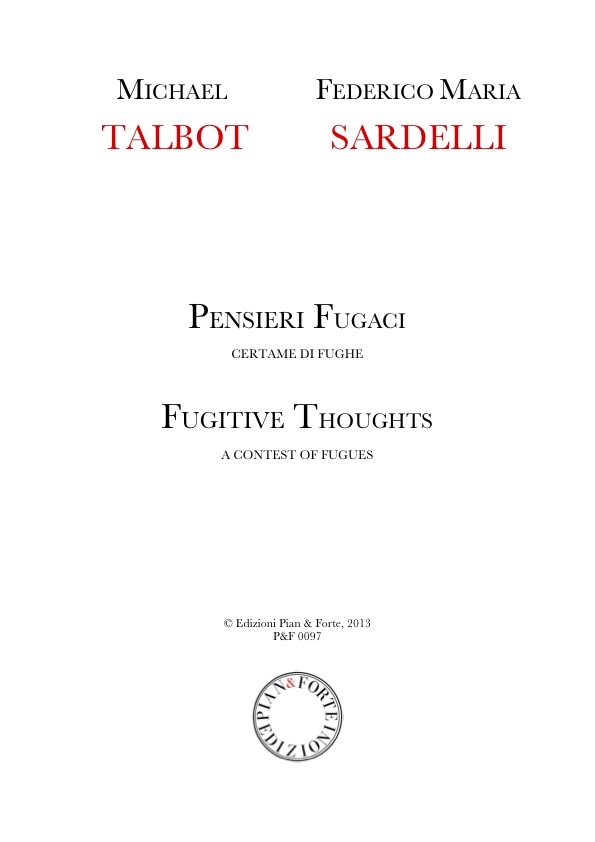 (Other)
...
Fugitive Thoughts - a contest of fugues


Who writes fugues any more? The question is almost rhetorical, but not quite. All over the world a handful of people compulsively, and doubtless often furtively, indulge this habit. They do so partly for mental exercise, partly in homage to music that they love, and partly because, slightly paradoxically, to write a fugue can actually be more straightforward than to compose a piece in most other forms, since there are clear principles of construction and good models to follow.
In theory, fugues can be written in any tonal musical language from Sweelinck to Shostakovich. It so happens, however, that the two authors who have joined forces to compile the present volume in the spirit of a friendly contest both prefer to adhere to the musical language of the first half of the eighteenth century. Each has his favourite models and influences within this period, which it is left to the users of this volume to discover. Prior to conceiving the idea of the present collection, the authors have been exchanging fugues over the Internet for a year rather in the spirit of chess players trading moves.
A word of reassurance. These are not “examination fugues”. There is no obligatory checklist of devices to apply in each and every composition, such as invertible counterpoint, stretto, pedal-point, inversion, augmentation and diminution. Each fugue takes just what it needs from this stockpile and ignores the rest. These are fugues for enjoyment (preferably in performance), not merely for erudite display.
It is the wish of both authors that this collection will provide a permanent record of their fugal endeavours, which have been so much greater as a result of being shared. At the same time, we hope that our friends will find interest and pleasure in them. This is a “contest”, certainly, but one in which the real winner can only be music itself. Or so one hopes.
Some points on performance need making. In most of the fugues dynamic markings are absent, but performers should of course freely introduce dynamic shading to suit their instruments, the performing conditions and their own response to the music. No continuo figures have been added to the fugues for ensemble notated in open score, but a performance of any of these may validly include a continuo part (identical with the existing bass part), appropriately figured and interpreted. The items for strings and for voices may be performed either one-to-a-part or several-to-a-part.
Will this volume mark the conclusion of our fugue-writing mania? The omens are not good for, as the Italian say, “L’appetito vien mangiando”. But for now it will form a satisfying testimony to a passion that we can happily recommend to others.