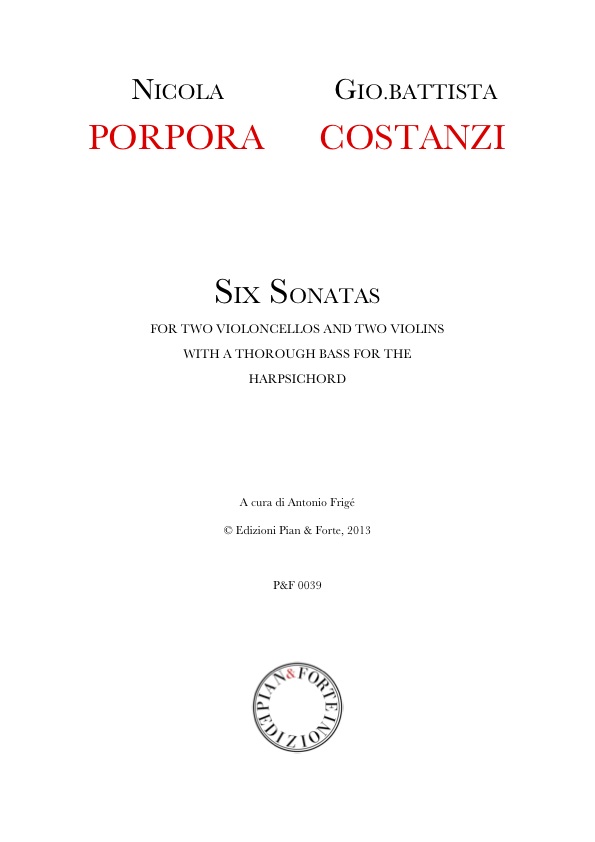 ntal music, which, although less extensive and little known, shows commitment and specific treatment. At the heart of this instrumental production are the Chamber Symphonies for three instruments, first published in 1736. This was the last year of the composer's stay in London, a period in which he was constantly trying to compete (not only in the vocal field) with the work of Handel.In the early years of his career, despite the cumbersome presence of Scarlatti in the Neapolitan area, Porpora gradually gained a good reputation as a composer of operas and vocal music in general. This reputation earned him commissions from theatres in major Italian cities such as Rome, Venice and Reggio Emilia, and this led him to leave his own town. In 1733, he moved to London and organised a company of singers that rivalled the already established company of Handel. During his stay in England (1733-1736), Porpora published a collection of songs op. 1 to the text by Metastasio and the Chamber Symphonies op. 2, both dedicated to "His Royal Highness, Prince Frederico of Vallia"...
The six Sonatas in this edition were published in London in 1745 by J.Walsh under the title: “Six sonatas for two violoncellos and two violins with a thorough bass for the harpsicord composed by Sig. Nicolò Porpora and Sig. Gio Batta Costanza”. It is difficult to determine the individual contribution of both musicians to the work, a sort of four- hands piece with the famous roman cellist Battista Costanzi (1704-1778), a well-known virtuoso, who will count Boccherini among his pupils.
These are Sonatas “auf concertenart”(sonatas in Concerto style). The two violins play always in unison as if it were a “ripieno” section, whilst the cellos are divided in violoncello concertante and cello that strengthens the bass doubling the harpsicord’s part. The “duplicity” of the violins is for this reason essentially different, as to structure and function, from the violoncello’s one...