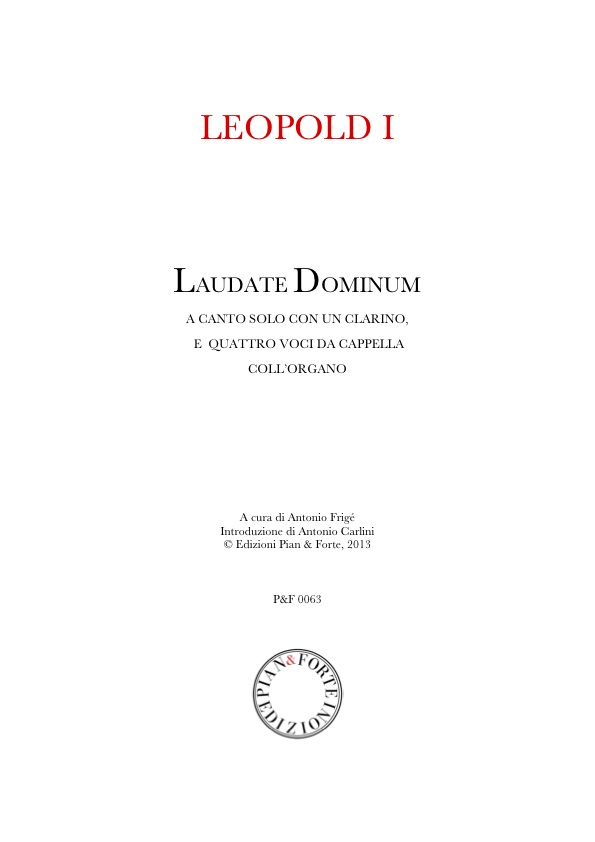 Leopold I (1640-1705), Laudate Dominum. / omnes Gentes. &c. / à / Canto. solo con un / Clarino / et / Quattro uoci / da / Capella. coll'org: (Di S: M: C:)
The most romantic was surely Ludwig II of Bavaria, the swan-king crazily in love with Wagner and with his music. But in the world of royalty the catalog of sovereigns caught under the magic web of music has roots in the very birth of monarchy. Since its medieval beginnings, in fact, the history of the court is entwined with the essential presence of music, intensely taking advantage of if for its value in representing political power. And, as a consequence, it was inevitable that a nobleman educated in the art of music would then exercise his acquired competence in practice both directly (dancing, singing, playing an instrument, even composing), and especially indirectly in musical patronage.
Thus patrons, but also musicians, flower luxuriantly on the genealogical trees of crested families, dilettantes by way of role and rank, but certainly not by way of the results, which, while they may not rise to the heights of genius, were nevertheless always of the high quality of solid workmanship. If in France, where a king who could not dance was considered a "crowned ass," the Sun King presided over a super-refined absolutism of the dance, in the Germanic lands the Hohenzollern dominate with the "flutist" Fredrick II (1712-1786), who was preceded and challenged by the Hapsburgs who could boast of the Holy Roman Emperor Leopold I (1640-1705). Leopold I, while not a politician of the standing of a Fredrich "the Great," was nevertheless a composer of merit, a man who perhaps would have preferred to dedicate himself to the arts rather than to the government of a state.
Leopold I seemed to expend his energies in the enlargement of the musical chapel of his court, hiring Italian musicians, as well as in bringing about the production, between 1658 and 1705, of over 400 musical works for the theatre, subdivided between profane melodramas (for Carnival, for anniversaries of the royal family and for many other kinds of events in the ritual life of the court) and sacred oratories for the period of lent and on the occasion of Easter week. This was an effort in which the emperor was expansive in the apportionment of resources, spending as much as 100,000 florins (compared to an average of 20,000) for the production of “Il pomo d’oro” by Antonio Cesti. Not to mention the entertainments out of doors, in the gardens, or on hunting expeditions, always accompanied, naturally, by a musical component.
A repertoire to which Leopold I himself contributed, leaving for posterity a considerable group of manuscripts - arias, serenatas, sonatas and canzonettas and, above all, perhaps on account of his profound adhesion to the catholic creed, sacred works - oratorios, masses, vespers, litanies and psalms.
Among these, the Laudate Dominum. / omnes Gentes. &c. / à / Canto. solo con un / Clarino / et / Quattro uoci / da / Capella. coll'org: (Di S: M: C:), or Psalm 116...