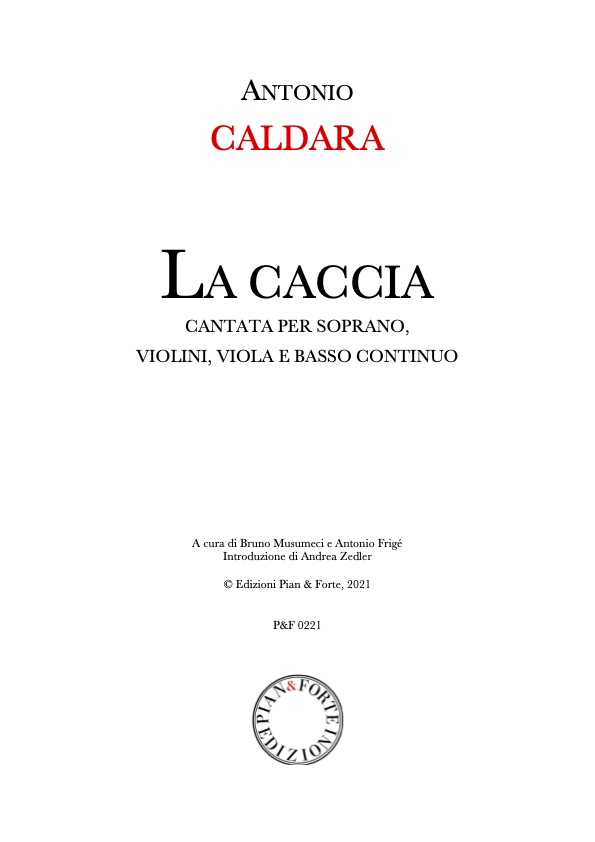 The cantata for soprano voice, violins, viola and basso continuo La caccia (“Cinto il fianco di saette”), which is now kept in the Santini Collection in the Diözesanbibliothek in Münster (D-MÜs SANT Hs 766), comes from the early repertoire composed for Prince Ruspoli. The invoice of the earliest copy of this cantata is dated 30 June 1709 and was made by Francesco Antonio Lanciani, who worked for years as a music copyist for the House Ruspoli. According to the anonymous text, the cantata is in five parts and has the sequence aria–recitative–aria–recitative–aria. A survey of the texts that Caldara set for Ruspoli between 1709 and 1716 immediately reveals their clear orientation towards the Arcadian-pastoral theme. Ruspoli, himself a member of the Accademia dell’Arcadia, thus placed himself ostentatiously in the tradition of this influential literary academy, and also offered its members a weekly stage for years with the Conversazione in front of a roman and international audience. Some academy colleagues were responsible for the textual basis of Caldara’s compositions; nevertheless, a clear attribution of the texts to an author is only possible in exceptional cases.
The text of La caccia establishes – and this sets it apart from the circle of pastoral cantatas of the Ruspolian repertoire – a direct link to Arcadia, the place of longing par excellence of the literary academy. It focuses on a nymph who is first invited (Aria 1, C major) to go out hunting by Mirtillo, a distinguished connoisseur of the pursuit of love. In the second part of the aria and the following recitative, it turns out that Mirtillo’s extraordinary hunting skills impress the nymph. In Aria 2 (B flat major), she describes how he uses his skills: one look from Mirtillo’s eyes is enough to fall victim to him. In doing so, his gaze hurts so much that the soul has to die. Impressed by this art, the nymph wants to learn love-hunting from Mirtillo because she believes that she will then be the happiest nymph in Arcadia. Her goal is thus to be the object of jealousy for shepherds inexperienced in love (Recitative 2). The concluding aria in C major leaves no doubt about the nymph’s conviction that she will only triumph in the realm of love when she has mastered the art of wounding a heart and subduing an unruly soul, even if she commits fraud (“frode”) in the process. The text, which is by no means oriented towards the pastoral idyll and is downright combative, allows for many readings, including political ones, the exploration of which is still a desideratum. Since the Arcadians chose pastoral names when they were admitted to the Academy – Ruspoli himself was co-opted as Olinto Arsenio in 1691 – Mirtillo may well refer to a real person, just as this cantata can be read as an allusion to Ruspoli’s role within the Academy.